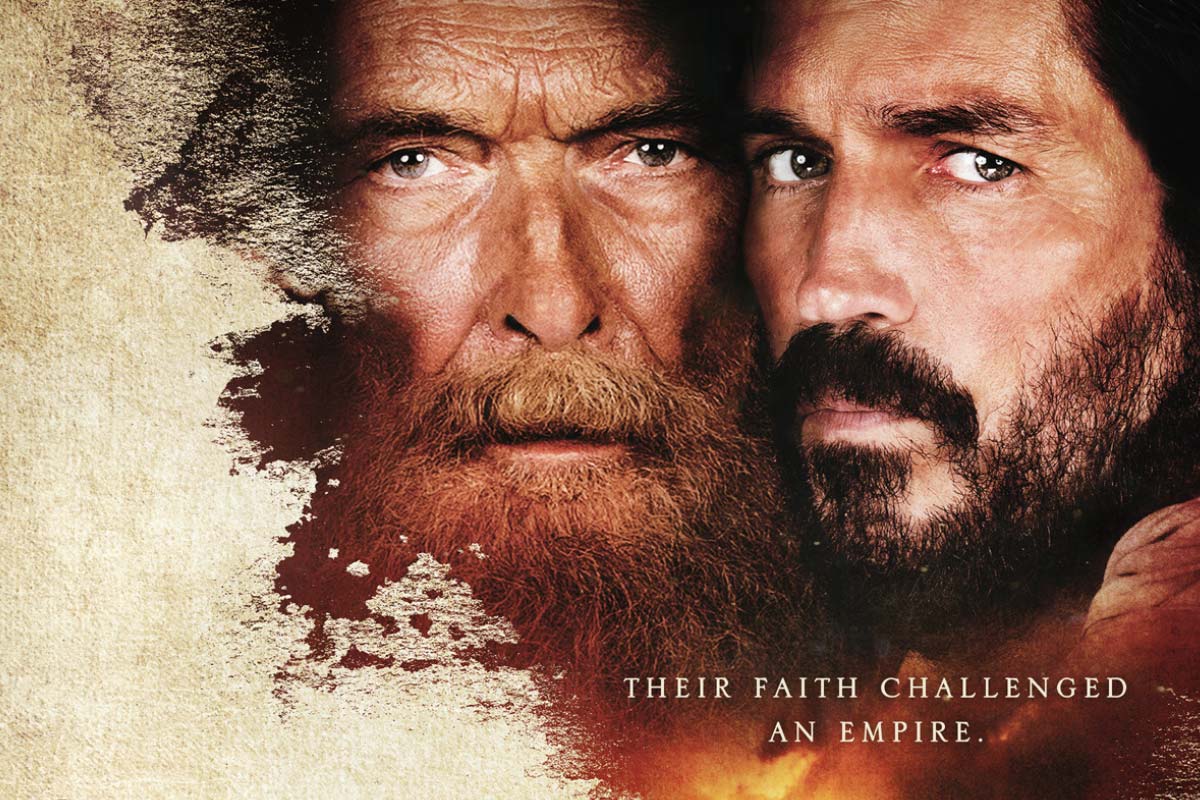 When so much of so-called “Christian” media falls flat on its face, Paul, Apostle of Christ is a breath of fresh air. I do not know about the beliefs of the writers or producers, but I know that the final product was superb, accurately presenting the biblical faith.

The film takes facts known from the Bible and then adds backstory (obviously not inspired) to present a drama about the Apostle Paul during his final prison stint in Rome. History tells us that the Emperor Nero blamed Christians for the fires of Rome that occurred in 64 AD. Tradition has it that Paul was put back in prison under charges of arson. During this time, Paul wrote his final letter (Second Timothy) and then was beheaded. The story of the movie begins with Luke visiting Rome to find Paul and encourage him to write his story (presumably the book of Acts). While this specific interchange between Luke and Paul may not have occurred as it did (in Rome, with Paul in prison, etc), it is true that Luke remained with Paul until the end (2 Timothy 4:11). Furthermore, it does seem that Luke wrote the book of Acts and would have undoubtedly relied upon Paul for much of that account. The drama unfolds by giving us a glimpse of the lives of early Christians in Rome, struggling under the heavy hand of Nero. A major thread in the movie is the interaction between Luke, Paul, and the prefect of Mamertine Prison. I will not provide a synopsis of the film―I encourage you to simply enjoy it yourself―however, I would like to point out four reasons why I thought the film was splendid.

One of my favorite parts of the film comes near the end, when Paul is talking with Mauritius Gallas, the prison prefect. As this conversation was progressing, I began to feel uneasy. Would the film present salvation in the insipid and man-centered way that is so common among professed Christians? I had seen too many films where the focus is on the will of the sinner. “All you have to do is choose Christ! You have all the power to accept or reject him! He wants to save you, but you are stopping him!” All of this goes against what the Bible teaches. Thankfully, I was pleasantly surprised:

Mauritius: “What if, after all this, I still do not believe in your Christ?”

Paul: “I wasn’t trying to convince you. Listen to me. There’s only a moment. It’s not me. It is Christ himself that looks upon you and shatters your defenses. And in that moment, you will understand that you are completely known by God and you are completely loved. I will pray that moment comes for you.”

Think about Paul (the real one). He wasn’t trying to become a Christian. He hated Christ and Christians. Christ decided to look upon Paul and shatter his defenses. Paul couldn’t convince Mauritius of anything. Only God can change a heart of stone and make it a heart of flesh. Those whom God chooses to save do in fact come to know that they are completely known by God and completely loved by God. And I love the final line by Paul in the scene (in the film): “I will pray that moment comes for you.” He knew that only God could make that moment come for Mauritius. Even if the writers of the film didn’t understand the biblical gospel, they presented it correctly. (Maybe it’s sort of like how all Arminians pray like Calvinists…)

2. No sugarcoating―not “your best life now”

“Yea, and all that will live godly in Christ Jesus shall suffer persecution” (2 Timothy 3:12). The Bible makes it clear: being a Christian does not mean everything is going to work out as we think best. It will work out as God thinks best, but that often includes suffering, sickness, persecution, and untimely death. The film portrayed this biblical (and historical) truth accurately. From Christians being burned as human torches (which did in fact occur during Nero’s reign) to orphans being murdered, the film did not sugarcoat any of the gruesome realities that occurred in the first century (and still occur around the world today). What’s more, they showed the real struggle that Christians have with these hardships. Instead of presenting Christians as ultra-spiritual monks who are unfazed by suffering, they showed that Christians are real people who can be pushed to their limit by wickedness and injustice. It is only Christ and his love that can give strength to Christians during times such as those. By presenting Christians as weak and struggling within themselves to find forgiveness for their oppressors, it magnifies Christ, reminding us that he is the one that enables frail, weak, needy sinners to rise above evil and injustice by showing the love of Christ.

The truth that God does not simply give us what we think is best comes up in various ways throughout the film. At one point, Mauritius asks Paul if God will heal his daughter:

Mauritius: “My daughter is sick. If I pray to your Christ, your God, will she be healed?”

Mauritius: “So you offer nothing.”

Paul: “I offer the truth of salvation that has been set on my heart.”

Mauritius had been praying to his Roman gods for healing. However, his daughter remained deathly ill. The writers of the film could have used that conflict to show that God can heal people and then cause Mauritius to come to faith as a result of his daughter’s miraculous recovery. I am so glad they didn’t take that route. And I love Paul’s answer: “I don’t know.” So many today who claim to be Christians should follow suit.

In my own life, I have interacted with many who think that if we just pray hard and long enough God will heal our sick loved ones. In fact, a few days before watching this film, my wife and I had a long conversation with a family member about this very point. Some people seem to think that it is God’s will to heal everyone and if we simply pray enough, he will answer. I responded that, while I know God can heal, his ways are often not our ways. The secret counsel of God is beyond my grasp (Deuteronomy 29:29). I do not know if God will heal someone. What I do know is that God promises to never leave or forsake me (Hebrews 13:5). He will give strength in every trial to love him and obey his Law-Word. This is what I need faith to believe and act upon. And so, when confronted with terrible suffering and imminent death, I do pray for healing, but more importantly, I pray: not my will, but thy will be done. His ways are not our ways.

3. The importance of God’s Word

I get a warm, fuzzy feeling whenever I see the triumph of God’s Word in history. At the end of the film, we see Christians making numerous copies (manuscripts) of Paul’s writings to disseminate throughout the Roman empire and beyond. One of the final lines of the film is Paul quoting from the following Scripture:

“Remember Jesus Christ, risen from the dead, the offspring of David, as preached in my gospel, for which I am suffering, bound with chains as a criminal. But the word of God is not bound!” (2 Timothy 2:8-9)

The film-long depiction of Paul, chained and bound in prison, makes this line come to life. But the Word of God was not merely a peripheral element in the film; it was central not only to the plot, but also to so many themes presented throughout the movie. Watch it and you will see this.

A final part of this movie that I really liked was the portrayal of Paul’s thorn in his flesh. First, the Bible text this is referring to:

So to keep me from becoming conceited because of the surpassing greatness of the revelations, a thorn was given me in the flesh, a messenger of Satan to harass me, to keep me from becoming conceited. Three times I pleaded with the Lord about this, that it should leave me. But he said to me, “My grace is sufficient for you, for my power is made perfect in weakness.” Therefore I will boast all the more gladly of my weaknesses, so that the power of Christ may rest upon me.  For the sake of Christ, then, I am content with weaknesses, insults, hardships, persecutions, and calamities. For when I am weak, then I am strong. (2 Corinthians 12:7-10)

Various ideas have been presented as to what this “thorn in the flesh” was―from malaria to epilepsy to Alexander the coppersmith. However, the film powerfully presents the thorn as Paul’s past atrocities committed against Christians. Before Paul became a Christian, he was known by the name Saul, and he hated Christians:

But Saul, still breathing threats and murder against the disciples of the Lord, went to the high priest and asked him for letters to the synagogues at Damascus, so that if he found any belonging to the Way, men or women, he might bring them bound to Jerusalem. (Acts 9:1-2).

Paul is the main character of this film and his struggle with his past sins is central to the film’s progression and resolution. The presentation of this man’s deep sorrow and remorse over his past wickedness against the very people he now is willing to die for is poignant and stirring. The final scene of the movie contains no speech, but provides powerful resolution to Paul’s conflict.

Paul, Apostle of Christ is not simply one of my favorite “Christian films,” it is one of my favorite films period. All the normal good movie elements are there: music, acting, cinematography, etc. Those elements are necessary so that the audience can truly be absorbed in the greatest story ever told: the triumph of Christ in history. Paul, Apostle of Christ, tells a part of that story.

[Note: the film is rated PG-13 because of violent content and disturbing images. These images include Christians being burned alive and other deaths. You must make your own decision, but we watched this film with our 8-year-old daughter and found it a worthwhile experience that helped bring what we read about in the Bible and Foxe’s Book of Martyrs to life.]